NASSAU, The Bahamas – Representatives from women’s and other organizations across The Bahamas gathered “downtown” in Parliament Square Monday for the Launch of 16 Days of Activism for the Elimination of Violence Against Women and Girls. 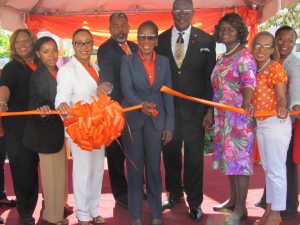 Mrs. Patricia Minnis, Office of the Spouse of the Prime Minister, cuts the orange ribbon signaling the official start of 16 Days of Activism for the Elimination of Violence Against Women and Girls in The Bahamas during the Launch, Monday, November 25, in Parliament Square. (BIS Photo/Matt Maura)

The 16 Days of Activism Campaign begins annually on November 25, a day that is observed globally as the International Day for the Elimination of Violence Against Women and Girls and ends on December 10, which is observed as Human Rights Day.

Representatives of the Zonta Club of New Providence, the Zonta Club of Nassau, S.M.A.R.T. Women, the National Women’s Advisory Council (NWAC), Princess Court Ministries, Teen Life Skills Services, Women of Strength, Kiwanis Club of New Providence, the National Congress of Trade Unions and its Women’s Association, and many other stakeholders and partners attended the Launch along with officials from the Ministry of Health, the Ministry of Social Services and Urban Development and the Department of Gender and Family Affairs/Ministry of Social Services and Urban Development, as they “took over” Parliament Square for the Launch.

Minister of Social Services and Urban Development, the Hon. Frankie A. Campbell, told attendees that the significance of the Ceremony, and the country’s commitment to ending Gender-Based Violence and violence in general, was highlighted by the fact that the portion of Bay Street (from Parliament Street to East Street) was closed to vehicular traffic in order to facilitate the event.

The Launch was attended by Speaker of the House of Assembly, the Hon. D. Halson Moultrie and his wife, Mrs. Kim Moultrie; Mrs. Patricia Minnis, Office of the Spouse of the Prime Minister, and Mrs. Ann Marie Davis, wife of the Leader of the Official Opposition, the Hon. Philip ‘Brave’ Davis. Mrs. Davis is an avid partner in the fight against Gender-Based Violence.

“This is an auspicious occasion. It is not everyday that we close down portions of Bay Street. This is an important occasion, but it is important that we cause this to be more than just a ceremony,” Minister Campbell said.

Minister Campbell said it will take an “all hands on deck” approach to ending Gender-Based Violence, and violence in general, in The Bahamas.

“On the question of ending violence against women, and let me for the record state that I am concerned about ending violence period, but today we are here to talk about ending Gender-Based Violence. We all have a responsibility. This is just not a job for any one grouping; any one sector.”

Minister Campbell said fathers and mothers, individual citizens and social groupings, and men from all walks of life, must become stakeholders and share in the responsibility. Minister Campbell also offered a bit advice to young women in The Bahamas.