NASSAU, The Bahamas – The Government of The Bahamas has committed to doing all in its power to end Gender-Based Violence in the Commonwealth by the Year 2030, Minister of Social Services and Urban Development, the Hon. Frankie A. Campbell, said Monday. 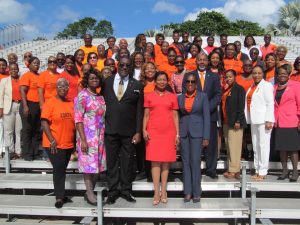 Representatives from female organizations across The Bahamas at the Launch of the 16 Days of Activism for the Elimination of Violence Against Women and Girls, held Monday (November 25, 2019) in Rawson Square. (BIS Photo/Matt Maura)

Addressing the 2019 Launch of the Sixteen Days of Activism for the Elimination of Violence Against Women and Girls held in Rawson Square, Minister Campbell said the commitment was made by himself on behalf of the Government of The Bahamas while attending the International Conference on Population Development (ICPD) 25th Anniversary Meeting.

Minister Campbell, was accompanied to ICPD 25 by the Hon. Brensil A. Rolle, Minister for the Public Service and National Insurance, and Mrs. Elaine Sands, Gender-Based Violence Expert in the Department of Gender and Family Affairs, Ministry of Social Services and Urban Development. The Conference took place November 12-14 in Nairobi, Kenya.

Co-convened by the Government of Kenya, the Kingdom of Denmark and the United Nations Population Fund (UNFPA), the Meeting was a High-Level Summit that focused on the recommitment of world leaders to complete the ICPD Programme of Action that was initiated in Cairo, Egypt, in 1994, and in recognition of its “important contribution” to accelerating the achievement of the Sustainable Development Goals (SDGs), 2030 Agenda.

The Programme of Action serves as a blueprint for the empowerment of women and girls for their sake, and for the benefit of their families, communities and nations.

“I was pleased, on behalf of the Government and People of The Bahamas, to commit that The Bahamas will do all that it can to end Gender-Based Violence by 2030 — Zero Gender-Based Violence by 2030,” Minister Campbell said. “That is a very ambitious undertaking, but it is something I am satisfied that we can do if everyone participates; if everyone finds their role and [would] get up and do something.”

Minister Campbell outlined the Government’s Plan of Action to meet this objective through the Ministry, the Department of Gender and Family Affairs and its various stakeholders and partners.

One aspect of the Plan is to place even greater focus on perpetrators of Gender-Based Violence.

“Unless or until there is a shift in the mindsets and perspectives of the persons who perpetrate this violence, we will just be spinning wheels; we will just be going around in circles,” Minister Campbell said to a rousing round of applause.

Minister Campbell said the Plan of Action does not stop there.

“We realize that as we work and focus on changing the mindsets and perspectives of those who would have already committed those breaches and infractions, that it is important that we also work on some level of prevention and so we will work with 500 boys from the private and public-school sector to cause them to have an appreciation for the partnerships that are necessary with our females; for the roles that they (as males) were called upon to play by the Almighty Himself, for them to protect our females; for them to have an appreciation that in order for The Bahamas to advance to the next level, we must have those firm and solid partnerships between boys and girls who will grow up to be women and men who will take over this country from us.

“We will also work with the Archdiocese of Nassau (Roman Catholic Church) which has a programme for batterers (The Men’s Group) that is populated predominantly by persons who are sent from the Courts.”

Minister Campbell told the attendees that the country needs to have “an all hands on deck” attitude in the fight to end Gender-Based Violence, and violence in general.