COMMONWEALTH OF THE BAHAMAS 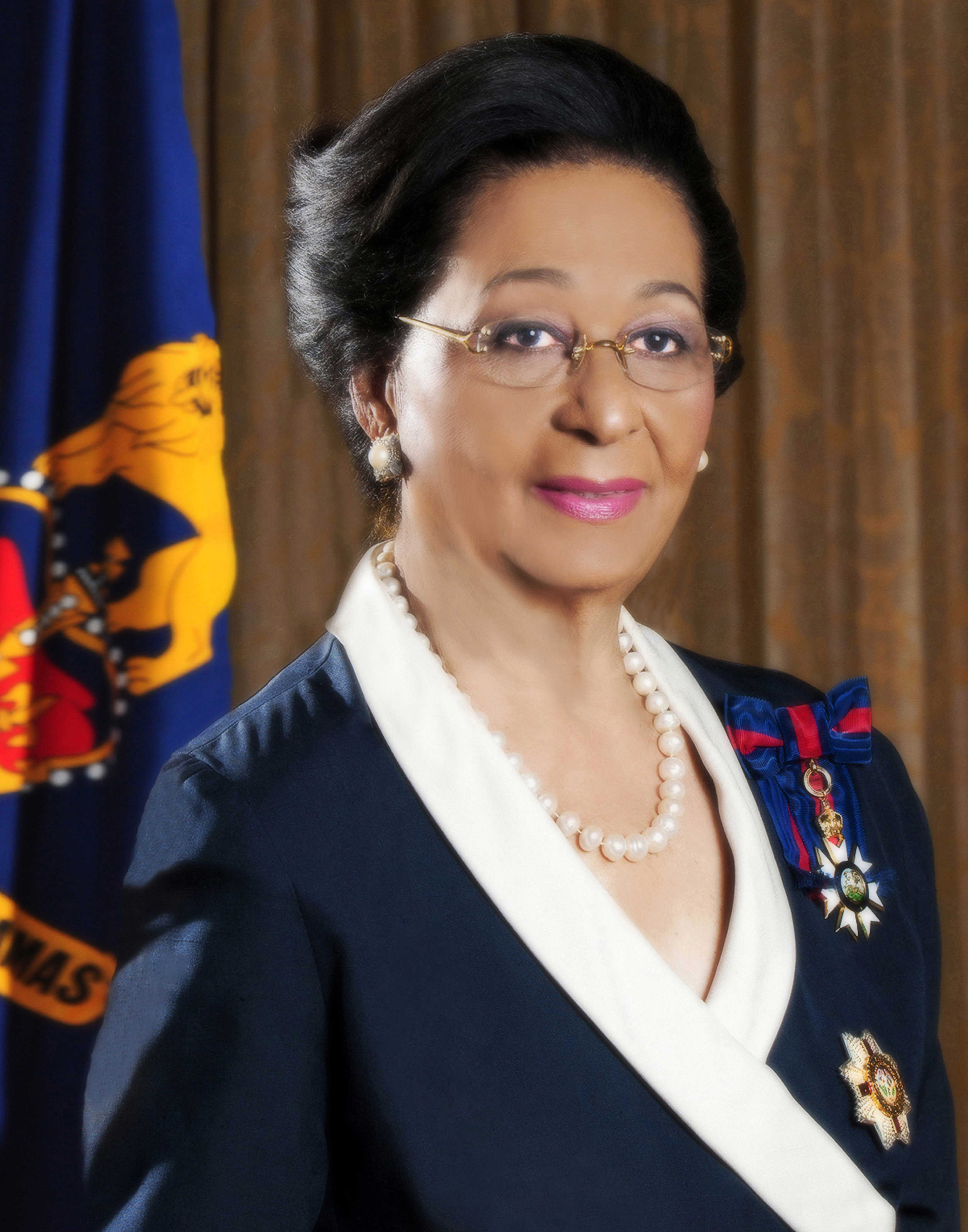 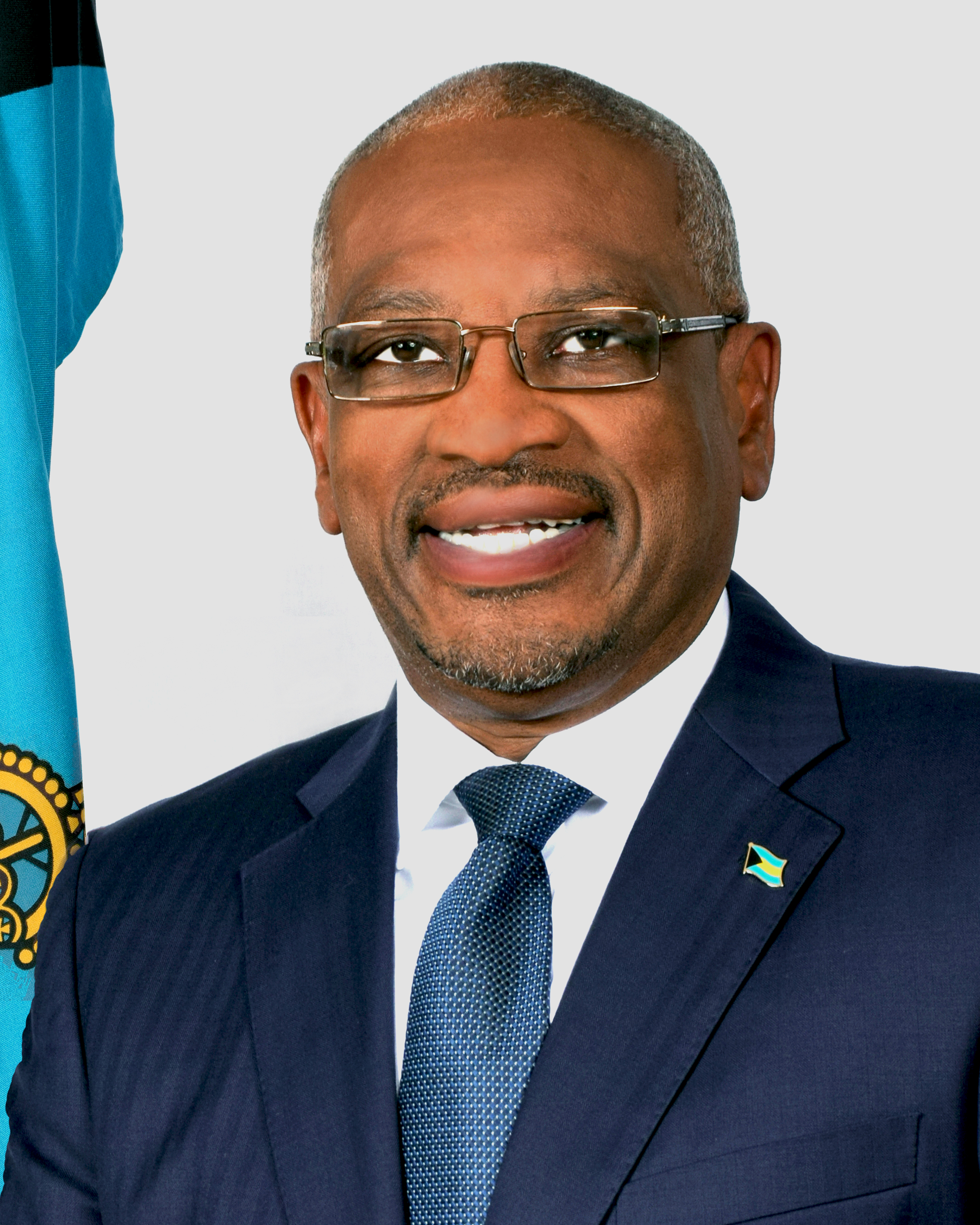 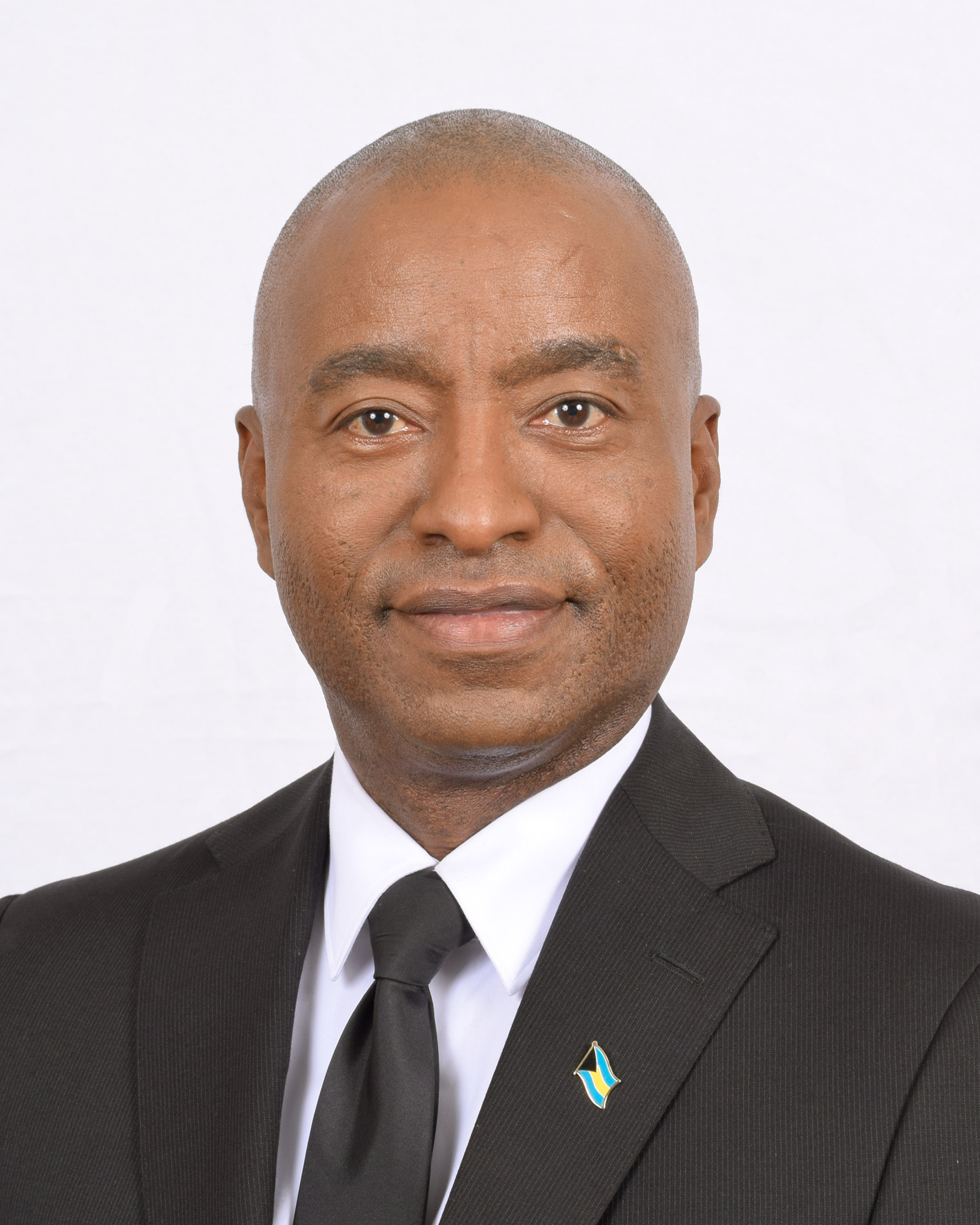 The Bahamas are governed under the constitution of 1973 and have a parliamentary form of government. There is a bicameral legislature consisting of a 16-seat Senate and a 40-seat House of Assembly. The prime minister is the head of government, and the monarch of Great Britain and Northern Ireland, represented by an appointed governor-general, is the titular head of state. The nation is divided into 21 administrative districts.

The Islands of the Bahamas achieved independence from Great Britain on July 10, 1973. The head of State is the Queen of England, who is represented in The Bahamas by the Governor-General. The Government is headed by the Prime Minister and Parliament comprises an upper house, the Senate, with appointed members and a lower House of Assembly with elected members.

The Siboney, Meso-Indians, who migrated into the Greater Antilles, were probably The Bahamas’ original inhabitants. Christopher Columbus made his first landing in the New World at San Salvador, a small island in the east central part of The Bahamas chain on October 12, 1492. The Spaniards named this part of the New World Bajar Mar (shallow seas). When Columbus purportedly ‘discovered’ the islands, he found Lucayans and called them Indians. They were in fact related to the neo-Indian Arawaks in the larger Caribbean Islands and practicing a Tainan culture. The Arawaks had originally come from the South American mainland. Being peaceful by nature they were forced northwards by the more warlike Caribs. It is believed that they arrived in The Bahamas between AD500 and AD600, settling from Cuba and Hispaniola. The Lucayans, as the Arawaks came to be known in The Bahamas, had no written language – only a spoken one. Eager to find gold, conquistadors followed Columbus. During this time, the Lucayans were wiped out by enslavement, disease and other hardships.

The Eleutheran Adventurers, led by William Sayle from Bermuda, settled in Eleuthera from 1647 to approximately 1658. New Providence, initially known as Sayle’s Island was settled about 1666. In 1670 The Lord Proprietors of England were granted the Bahamas by King Charles and the settlement on the harbour of Providence was named Charles Town. Pirates soon inhabited the new town, which was destroyed by the Spanish several times from 1684 to 1702. Governor Nicholas Trott renamed the town Nassau, one of the titles of the new king, William of Orange.

After the Queen Anne’s War ended in 1713, Nassau became a “Nest of Pirates” and became notorious for the drinking and wenching by Blackbeard, Charles Vane and Calico Jack Rackham. However the real pirate leaders were Henry Jennings and Benjamin Hornigold, who on his pardon assisted Woodes Rogers to expel pirates. Rogers, the first Royal Governor, was appointed 2 by King George I and his anti piratical zeal inspired the memorable motto for our country, EXPULSIS PIRATIS, RESTITUTA COMMERCIA (Piracy expelled, Commerce restored).

In 1783, The Bahamas was restored to Great Britain by treaty. Following the American Revolution, thousands of British Loyalists emigrated to The Bahamas, many bringing their black slaves with them. The Emancipation Act was designed to come into force on August 1, 1834, bringing freedom to the slaves, however it did not immediately give the slaves complete freedom. The ex-slaves did not become fully free until August 1, 1838 after an apprenticeship period which effected the transition between slavery and freedom.In 1964 Great Britain granted the Bahamas internal autonomy. The Black Progressive Liberal Party (PLP) won control of the government in general elections in 1967. The leader of the party Lynden O. Pindling, then became Prime Minister and remained in this position until August 1992 when the Free National Movement (FNM) won parliamentary elections and Hubert Ingraham became Prime Minister.

Once heavily reliant on agriculture and fishing, the Bahamas is now a stable, developing nation heavily dependent on tourism, offshore banking, and international shipping. While the nation enjoys a per capita income that is among the top 30 in the world, there is a big gap between the urban middle class and poor farmers. In addition, the nation is vulnerable to hurricanes, which regularly inflict serious damage.

The islands’ vivid subtropical atmosphere—brilliant sky and sea, lush vegetation, flocks of bright-feathered birds, and submarine gardens where multicolored fish swim among white, rose, yellow, and purple coral—as well as rich local color and folklore, has made the Bahamas one of the most popular resorts in the hemisphere.

The islands’ many casinos are an additional attraction, and tourism is by far the country’s most important industry, providing 60% of the gross domestic product directly or indirectly employing about half of the workforce. Financial services are the nation’s other economic mainstay, accounting for about 15% of GDP.

However, since December 2000, when the government enacted new regulations on the financial sector, many international businesses have left The Bahamas. Salt, rum, aragonite, and pharmaceuticals are produced, and these, along with animal products and chemicals, are the chief exports. The Bahamas also possess facilities for the transshipment of petroleum. The country’s main trading partners are the United States and Spain.

Manufacturing and agriculture together contribute approximately a tenth of GDP and show little growth, despite government incentives aimed at those sectors. Overall growth prospects in the short run rest heavily on the fortunes of the tourism sector, which depends on growth in the US, the source of more than 80% of the visitors. In addition to tourism and banking, the government supports the development of a “third pillar,” e-commerce.

There are several components to the unique Bahamian culture. In the less developed outer islands, handicrafts include basketry made from palm fronds. This material, commonly called “straw”, is plaited into hats and bags that are popular tourist items. Junkanoo is a street parade of music, dance, and beautiful artwork held in many cities of the Bahamas every Boxing Day, New Year’s Day and also held for other Holidays such as Fox Hill Day. Regattas are another important social event in many family islands, they usually feature one or more days of sailing by old-fashioned work boats, as well as an onshore festival. Other family island settlements have festivals associated with the traditional crop or food of that area, such as the “Pineapple Fest” in Gregory Town, Eleuthera or the “Crab Fest” in Andros.

One of the greatest and most popular expressions of our culture is the junkanoo festival which is a significant aspect of the folklore of the people and has its origin in Africa. It came to The Bahamas through the Black slaves who were brought from Africa to work on the plantations in The Bahamas. Slaves were given three days off and during that time they celebrated with a ‘grand dance’. It has been described as “an annual outpouring of brilliant colour and design, strange music and rhythm and is something of which The Bahamas can be proud”. Junkanoo is the soul of the Bahamian.

Today junkanoo is celebrated in the early morning hours of Boxing Day (the day after Christmas Day) and New Year’s Day. The celebration takes place downtown Bay Street. From 1:00 a.m. until about 9:00 a.m. a throbbing rhythm from cowbells, goatskin drums, whistles, horns and a brass section vibrates throughout the streets. The rhythm cannot be resisted as the pulsating music brings movement to the most staid person. The revelers are dressed in a variety of colourful costumes and some carry large pieces depicting a particular theme. The work of planning and creating the intricately-designed and stunning crepe paper costumes takes a full year. 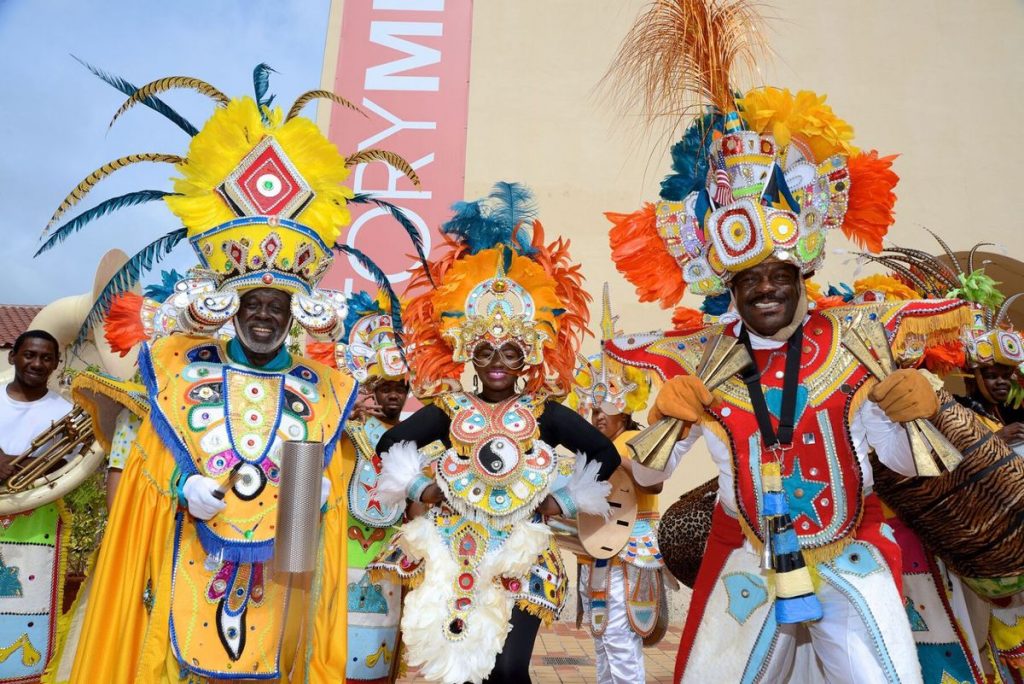 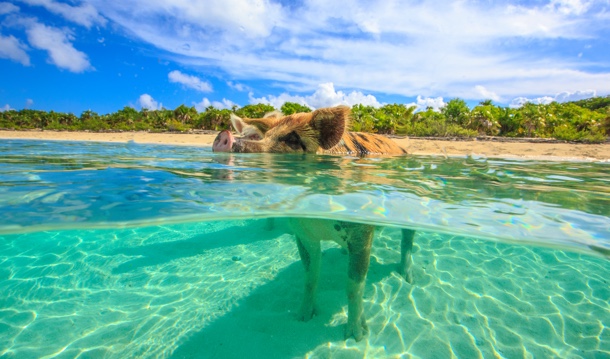 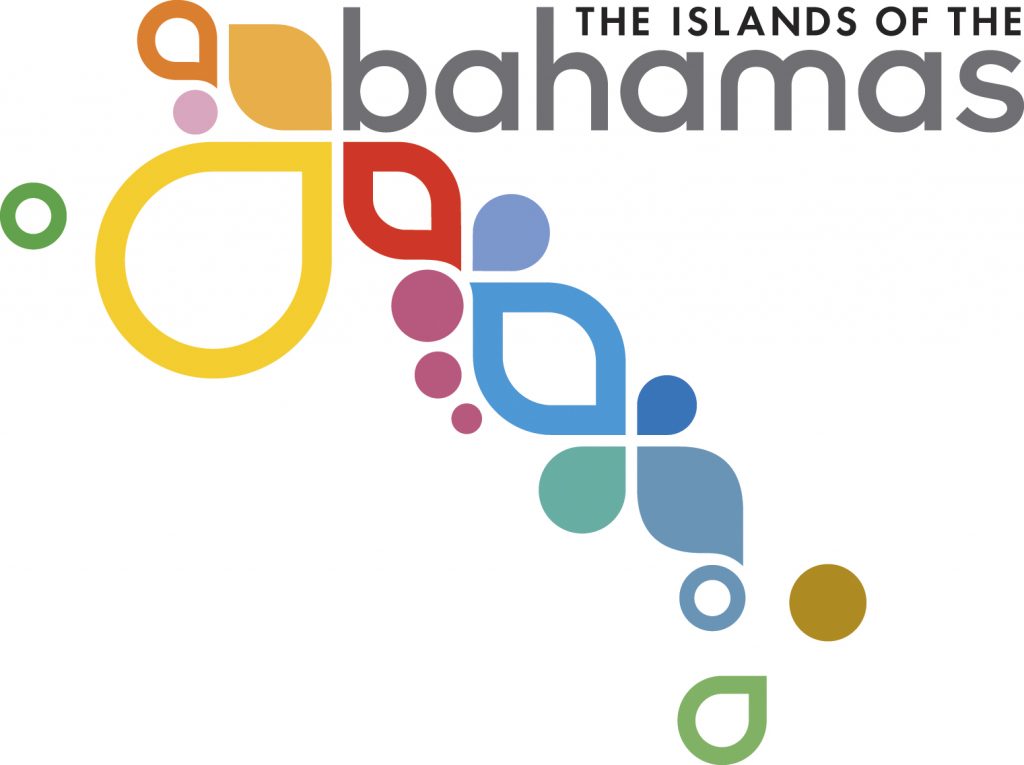 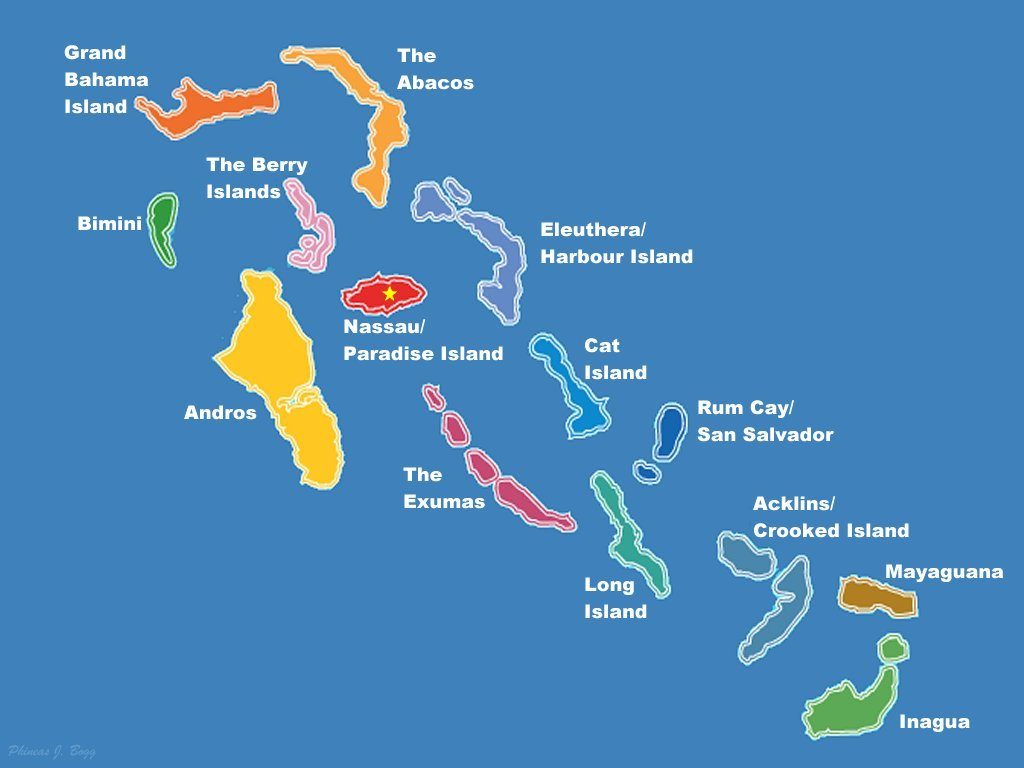 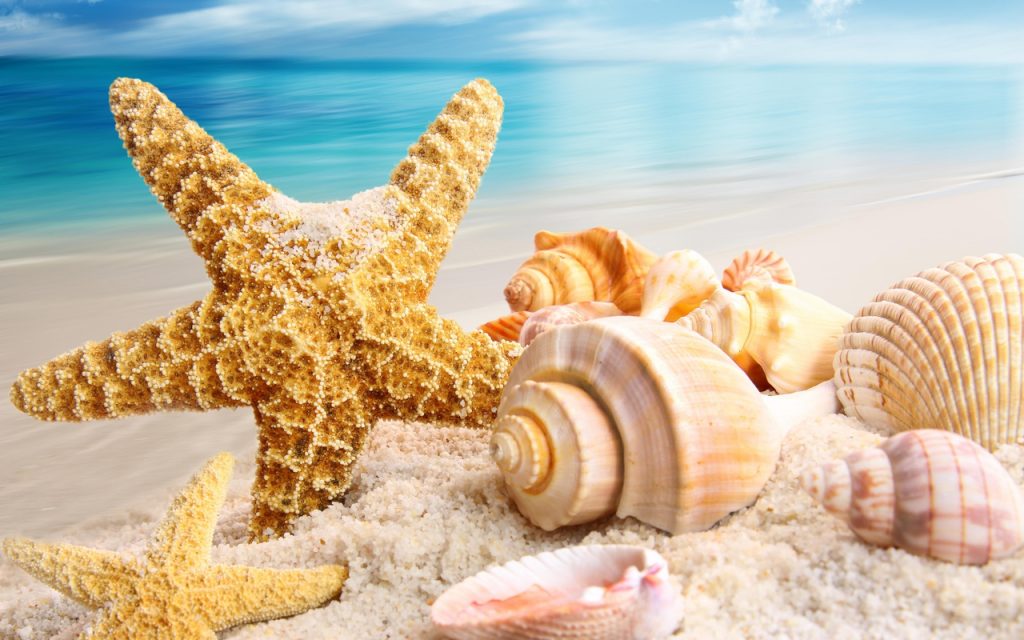 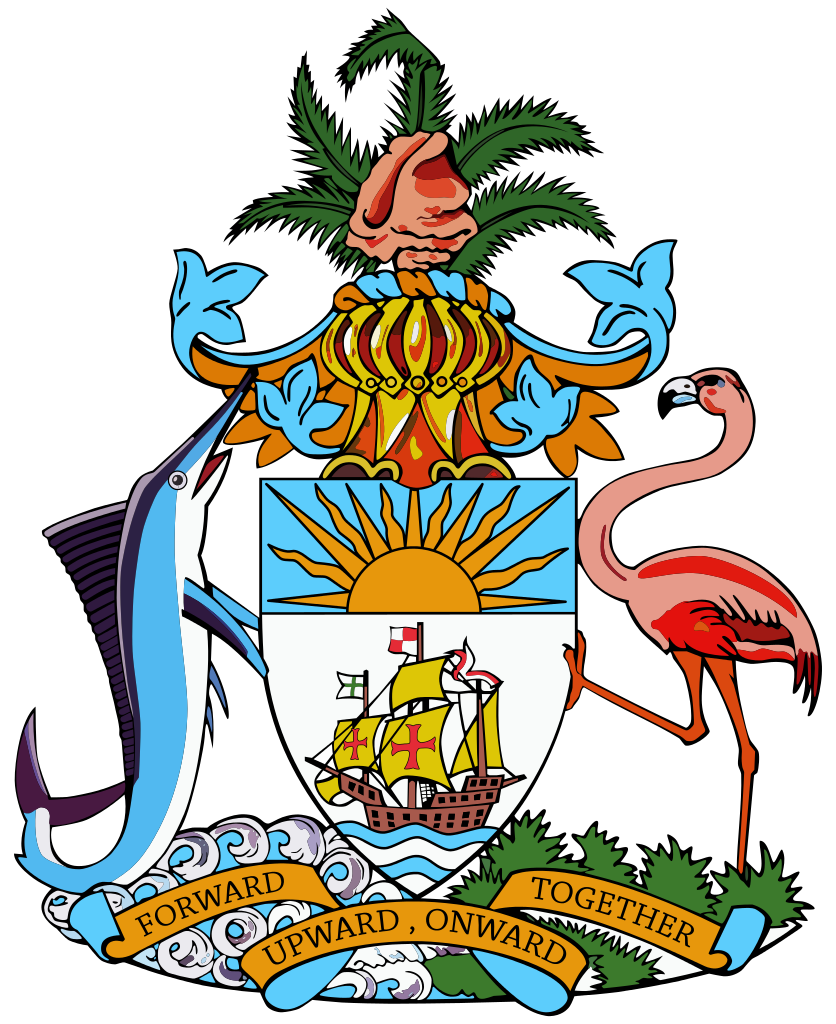