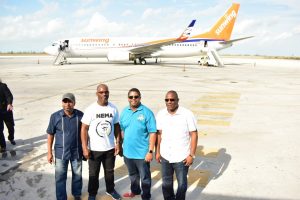 FREEPORT, Grand Bahama — Grand Bahama’s tourism got a big boost on Saturday and when Sunwing Airlines made its official return to the island, since Hurricane Dorian.

“This is an exciting day for Grand Bahama,” said Minister Thompson. “This is a major step in the revival of this island’s economy.”

Some 189 passengers from Montreal and Toronto, Canada, got the “royal treatment” when the flight landed at the airport and they were ushered into the refurbished FBO building, which will temporarily operate as the hub for international flights. In addition to being greeted by government and tourism officials, the passengers were treated to the sweet sounds of Junkanoo.

For most of the passengers it was an exciting first-hand experience and before boarding the bus that would transport them to their hotels, many of the guests spent some time taking photos of the Junkanoo group and some joined in with dancing. 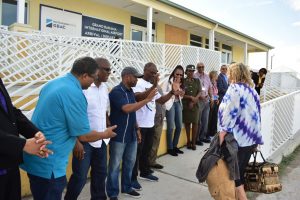 “After what Grand Bahama has been through in the past few months, this is a welcomed moment,” said Deputy Prime Minister Turnquest. “Hopefully, this is the re-start of the island’s international flight agenda.”

Other international airlines are expected to resume regular scheduled flights between Grand Bahama and the United States in short order.

Minister Thompson noted that there was much work that went into getting the facility renovated, mobilizing the staff and preparing for the arrival of the flight. He said that everyone involved in the preparations deserved to be thanked for their hard work and dedication.

“There was a lot of work to be done, in terms of getting the airport ready, organizing the groups and many other things. We also understand that Club Fortuna has undergone renovations, and so this has come in time to accommodate these guests.

“There will be regular flights from Sunwing that will continue to come in, so we are very pleased to see them return.”

“Each week, we will have close to 200 passengers come in from Toronto and the same amount coming in from Montreal,” Mr. Johnson pointed out. “These visitors will have an opportunity to ride around Grand Bahama, go to the fish fry, visit the beaches, take in some shopping and experience dining in Freeport.

Christine Culmer and Veronica Cuccurullo, Sunwing representatives in Freeport, said that they were excited to see the airline return to Grand Bahama. They are convinced that there is a lot Grand Bahama has to offer visitors and they are happy to be a part of providing that experience for visitors.

“This partnership is great for all of us,” said Veronica. “We have a great island here and a lot to offer and this is a start to what can become a major airlift boost for Grand Bahama. So, it is also great for the local economy. This is a start of hopefully bringing more airlift into the island.”

“It has been so important to Sunwing to get this back up and running,” added Christine Culmer of Sunwing. “It was very important for them to see that the financial status of this island gets uplifted again by employing locals, and they’re doing it.”