NASSAU, Bahamas — Several entrepreneurs whose businesses were impacted by Hurricane Dorian on the islands of Abaco and Grand Bahama received grant money from the S10 million taken from the Dormant Fund to help re-build their businesses during a press conference at the Ministry of Finance, Wednesday, October 30, 2019.
Deputy Prime Minister and Minister of Finance the Hon. K Peter Turnquest explained that the Government of The Bahamas pledged the $10 million to assist entrepreneurs in their rebuilding efforts to get back on their feet and back in operation, not only to provide opportunities for themselves, but also to re-employ people and to get people back to work as quickly as possible.
“This $10 million is part of the funds we allocated from the dormant funds, which was passed through legislation earlier this year.
“So we have taken $20 million from that fund, and $10 million we have allocated back to the Bahamian people through this offer of assistance to help people get back into business through support for inventory, support for fixtures and support for services they may need to get back operating as quickly as possible.”
During an October 10 press conference, it was announced that the Access Accelerator, Small Business Development Centre (SBDC), through the Ministry of Finance and private financial partners, was offering government guaranteed loans to micro, small and medium-sized (MSMEs) enterprises directly affected by Hurricane Dorian.
DPM Turnquest stated, ”Small business is the backbone of any economy; it is particularly so on these effected islands, so in as much as we can get them back in operation as quickly as possible, we are going to accelerate the pace of the recovery effort.
He added, “I want to congratulate all of you and to thank you for having the fortitude and the courage to re-establish your businesses; we know that you have gone through a tremendous traumatic experience both personally and professionally.”
SBDC Chairman, Geoffrey Andrews noted that in the pipeline, there are more entrepreneurs to receive funds.
SBDC Advisor to Abaco, Charmaine Bonaby explained that she will be returning to Abaco next week to be on the ground for those entrepreneurs who need advice and guidance as they re-build their businesses.

PHOTO CAPTION
Deputy Prime Minister and Minister of Finance the Hon. K Peter Turnquest attended a press conference, where entrepreneurs whose businesses were impacted by Hurricane Dorian on the islands of Abaco and Grand Bahama received grant money from the S10 million taken from the Dormant Fund to help re-build their businesses at the Ministry of Finance, Wednesday, October 30, 2019. Sitting from left: SBDC Chairman, Geoffrey Andrews; DPM Turnquest and Financial Secretary, Marlon Johnson. (BIS Photo/Patrick Hanna) 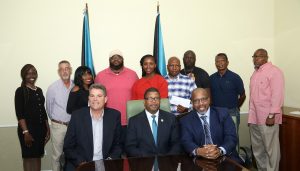