MARSH HARBOUR – Hundreds of residents of Marsh Harbour were in attendance at a town hall meeting Thursday night hosted by the Bahamas Disaster Reconstruction Authority and Local Government.

The Authority has been meeting with residents of Dorian-impacted communities to update them on recovery efforts and to hear their concerns.

Hurricane Dorian was the strongest storm to hit The Bahamians. It devastated central Abaco. Many homes and businesses were destroyed.

As a result, debris removal and waste management remain challenges.

Katherine Forbes-Smith, Managing Director of the Authority, said her agency is reviewing debris removal contracts issued in the immediate aftermath of the storm.

Where necessary, she added, noting residents’ concerns, contracts will be varied to ensure work takes place in an efficient and effective manner. 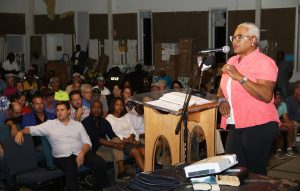 “We are looking at the entire island of Abaco to see where gaps are, where people are not cleaning.

“The terms of reference of those contracts are going to be changed to make sense as far as we’re concerned to meet the demand for what people expect and what the Government expects.”

Residents were keen to hear about the conference.

Mrs. Forbes-Smith explained the various types of assistance offered, emphasizing that the Government has to review each pledge to determine what would be best for the residents of affected communities.

“The total amount pledged was $1.5 billion,” she said.

“I want people to understand that that is not just cash. That’s in-kind donations. That’s technical assistance. That’s a number of things.”

Wendell Grant, Authority board member and engineer, explained that due to the extensive damage caused by Dorian The Bahamas cannot rebuild alone.

He said: “If we were to take a look at Marsh Harbour and in particular look at some of the surrounding communities and ask ourselves how we can we improve it, what can we do, one of the things that needs to be done in these communities to make sure the communities operate and function in ways that are not just improvements for today but improvements for future generations, the time and the resources that are necessary for that to happen in the shortest time, we have to go outside of what we currently have in country.”

Marsh Harbour residents raised concerns about police presence. Dorian destroyed much of the Bahamas Power and Light (BPL) infrastructure in the area.

Chief Superintendent of Police Bruce Arnett said more police are on the ground and they are actively patrolling in teams.

Arnett asked residents to make complaints to police if thefts occur. Those complaints would help police to know whose items they recover when culprits are caught.

Police have recovered a significant number of stolen items, he added. However, in the absence of complaints it’s not always clear whose items were recovered.

James Albury, Central and South Abaco Member of Parliament, expressed his confidence in the ability of the Abaco people to rebuild and recover in spite of the devastation from the storm.

“We will overcome this,” he said. “We’ll keep working to improve little by little and day by day. But if it is any of us that can do it, it’s us.”

The programme is scheduled to begin the first week of February. Residents will be able to use vouchers to purchase building materials and other items related to home restoration.

The Authority will continue hosting town hall meetings in communities affected by Hurricane Dorian during the next few weeks.