DIPLOMAT OF THE YEAR AWARDS 2019 – LONDON

Ambassadors and High Commissioners from over 95 countries (and diplomats from over 120 countries) attended the DIPLOMAT magazine 2019 annual Awards Ceremony in the Ballroom of the Jumeirah Carlton Tower in Knightsbridge on Monday 29 April. DIPLOMAT presented 10 awards to some of the most influential diplomats based in the UK.

Sponsors were Glasgow Caledonian University, International Diplomatic Supplies, Burke Bros Moving Group and Jumeirah Carlton Tower. Royal warrant holders’ Cleave & Co. produced the unique awards for the winners. For the second year, the Awards partnered with charity Football for Peace, a diplomatic movement supported by the Duke of Cambridge to create dialogue and understanding between people.

With over 180 diplomatic missions, a posting in London remains one of the highlights of any diplomat’s career. DIPLOMAT’s Editor, Venetia de Blocq van Kuffeler, said: “This is an award ceremony for diplomats, with winners chosen by diplomats. This evening is about hard work and technique. It’s about people and professionalism.” 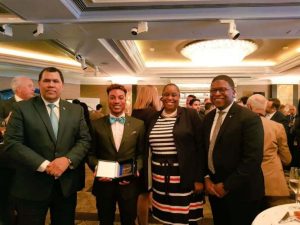 Wilfred Adderley II, (second, left) along with the other award recipients