Baroness: Commonwealth stands in solidarity with The Bahamas, Campbell says country to continue to lead charge on climate change

NASSAU, The Bahamas – The Commonwealth of Nations stand in solidarity with the Commonwealth of The Bahamas as the country continues to recover from the “terrible Hurricane Dorian and the terrible pain” it would have visited on parts of the northern Bahamas, Commonwealth Secretary-General, the Rt. Hon. Baroness Patricia Scotland said Monday.

Minister of the Public Service and National Insurance, the Hon. Brensil Rolle, joined Minister Campbell at the High-Level Dialogue along with senior government officials from the Ministry of Youth, Sports and Culture, and the Ministry of Social Services and Urban Development.

“I know the heavy responsibility that falls on your shoulders as you seek to make good some of the damage that has not only been caused to the infrastructure in the Commonwealth of The Bahamas, but much more importantly, how you will help to rebuild the resilience of the people of The Bahamas who would have been so grievously hurt by this terrible Hurricane,” Baroness added.

Minister Campbell thanked the Secretary-General and the Commonwealth for the kindness and support extended to the Government and the people of The Bahamas.

The Social Services Minister said The Bahamas has, and will continue, to lead the charge whether nationally, regionally or globally, on the question of climate change and its negative impacts.

“I know that we are merely victims in this whole question of climate change, but we are determined to be a voice to ensure that the larger countries know that our plight could be lessened if they take the necessary, further steps.”

Minister Campbell said The Bahamas Maritime Authority (BMA) is also working assiduously to partner with the IMO (International Maritime Organization) in the reduction of carbon emissions within the shipping industry.

“As a government and a country, we are going to do our part to ensure that everybody sees that we are trying to lead the way, small though we may be.”

“To have a friend come to visit you during a time of trial and tribulation is always heartwarming and uplifting,” Minister Campbell said. “I have said on many occasions that the outpouring of love we have received in the aftermath of Hurricane Dorian is an indication of the kinds of relationships that we have forged over the years and the fact that locally, regionally and internationally, we are regarded as friends – which is something we have always promoted as part of our tourism product,” Minister Campbell added. 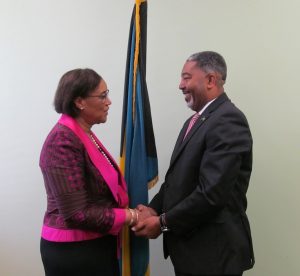